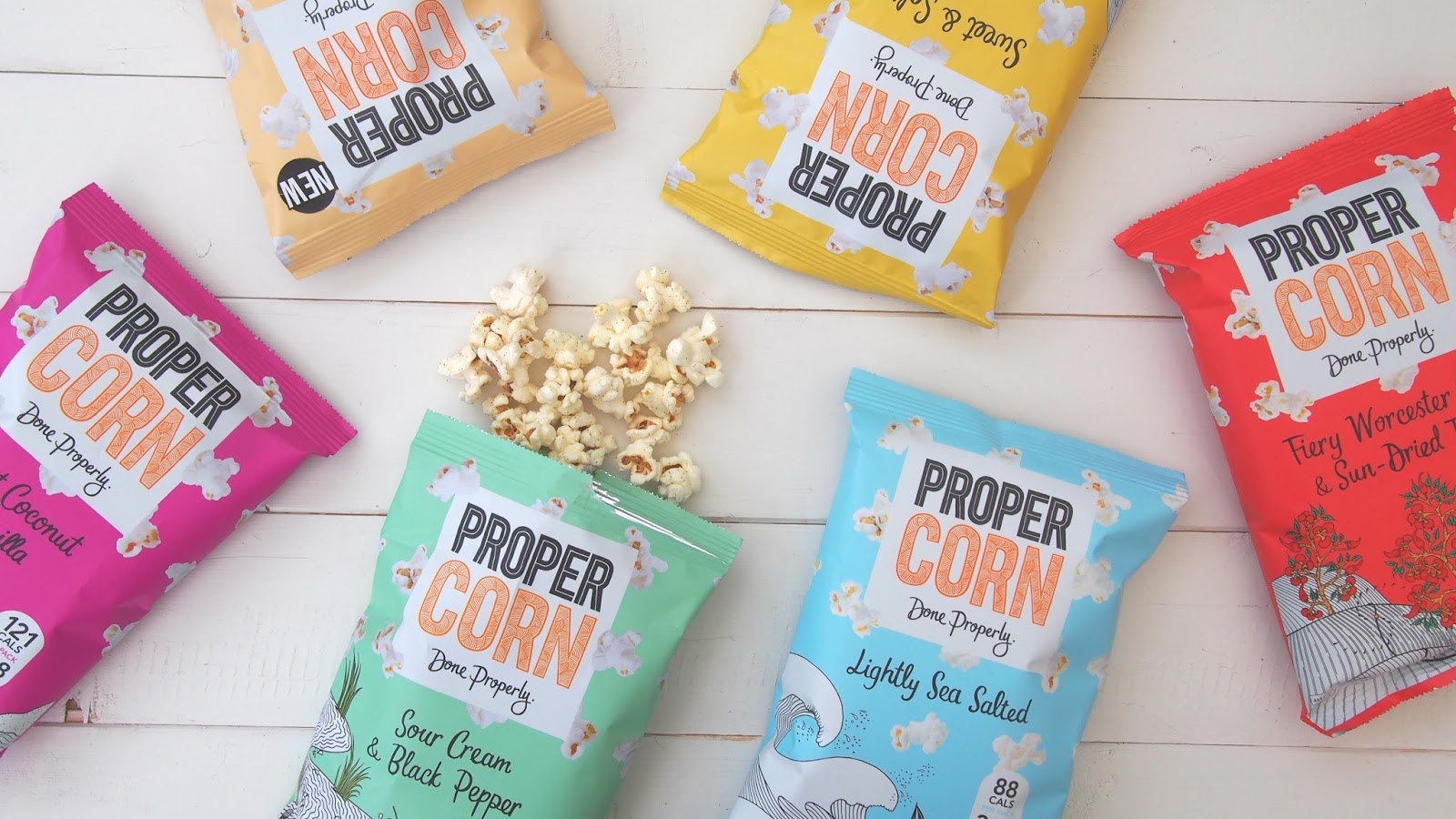 Most of you will know that I have a love/hate relationship with food. I’m always trying to eat healthy but forever giving in to chocolate or KFC, creating a vicious circle where I end up comfort eating because I’ve eaten something bad. With that in mind, I have been on the hunt for some low calorie snacks that can help me when I get my sweet or savoury cravings, usually when I get home from work or before bed…
I first came across PROPERCORN* at a bloggers event last year and instantly fell in love with their Sour Cream and Black Pepper flavour, so when they sent me a case filled with their entire range I was over the moon! I had been dying to try other flavours but they’re so popular they’re always out of stock when I go to get them.
The full range includes Sweet and Salty, Lightly Sea Salted, Firey Worcestershire Sauce and Sun Dried Tomato, Sweet Coconut and Vanilla, Sour Cream and Black Pepper and the new Smooth Peanut and Almond.
Although I only received these on Saturday, I have already managed to taste test each flavour…
Sweet and Salty
I think this is PROPERCORN’s original and most popular flavour, however it’s not my favourite. I ate the whole bag and enjoyed it, but found myself needed a drink afterwards as it was a lot more salty than it was sweet. It’s definitely my boyfriends and my Dad’s favourite, so if salty popcorn is your thing I’d say give this one a go first.
Lightly Sea Salted
This one is so much easier to eat as there is no where near as much salt and it makes the perfect mid-afternoon snack while at work. This is only 88 calories per bag and it takes a while to get through, which is absolutely amazing news for someone that’s counting calories.
Firey Worcestershire Sauce and Sun Dried Tomato
I was quite scared about trying this one as I had never had tomato flavour popcorn before but the firey kick is soooo good. I think this flavour is great as a replacement for crisps, but I don’t think it’s one I’d reach for to help kick cravings. 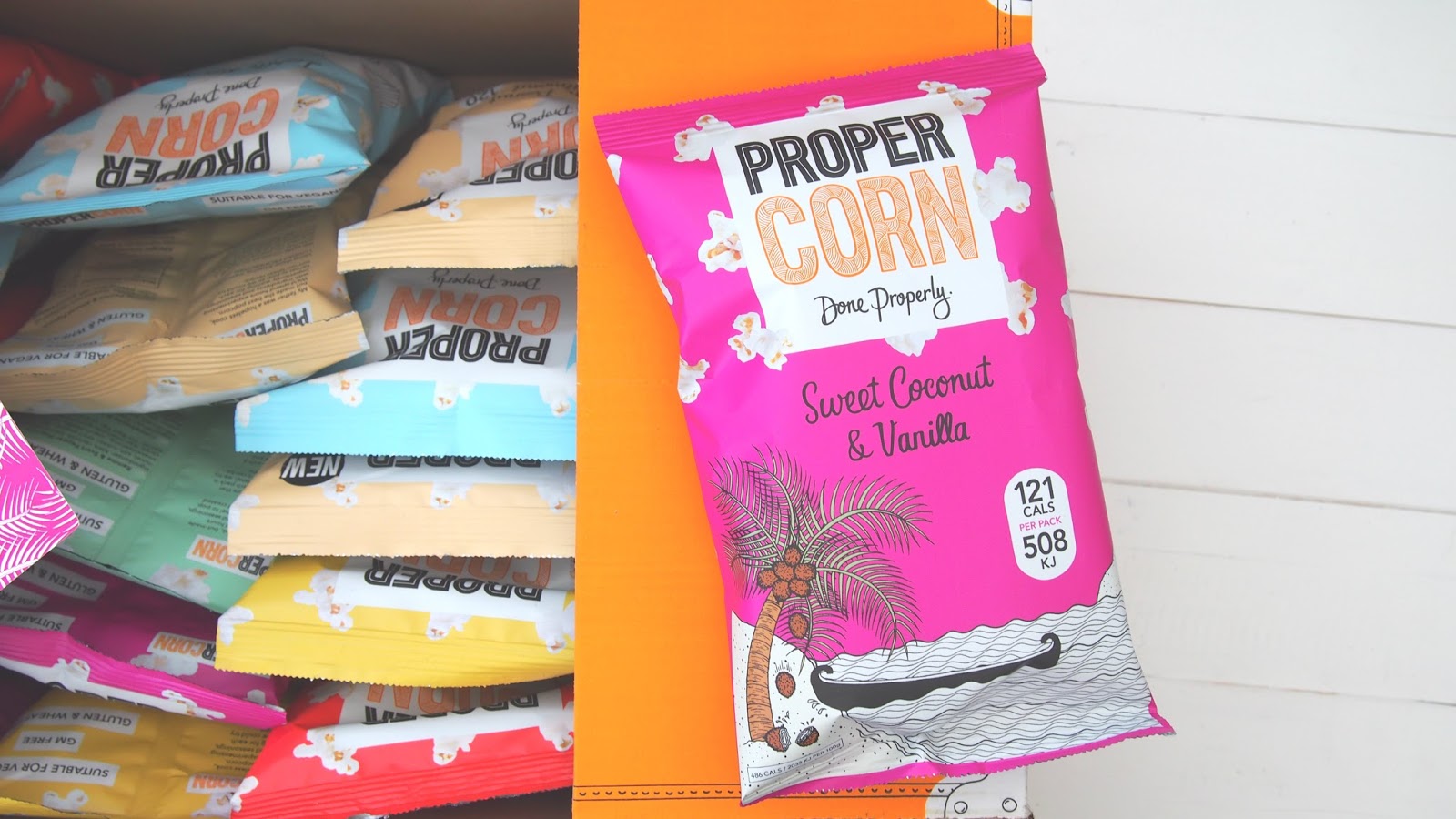 Sweet Coconut and Vanilla
This one is my ABSOLUTE favourite and it really shocked me as I didn’t think I would like the coconut flavour. It’s so sweet and moreish that the only problem is I could eat bag, after bag, after bag… I’m definitely going to picking some more of this up as I can easily see it becoming a replacement for the sweet treats I regularly eat that are high in calories.
Sour Cream and Black Pepper
This is another favourite and usually my go to as it’s the only one I had tried up until now. Believe it or not I actually hate black pepper, but mixed with sour cream it’s heavenly.
Smooth Peanut and Almond
As a huge peanut butter fan this flavour is amazing as it tastes so nutty and delicious. Again it’s another moreish one that I think I’d have to buy one at a time otherwise I’d eat them all…
You can find PROPERCORN in most supermarkets and places like WHSmith and One Stop (I think they do them 2 for £1 too!). Failing that you can order cases from the PROPERCORN website, including the mixed case I received to review.

Entering Paradise: 8 Amazing Things You Can Do in Maldives

Three Bedrooms Inspired by a Love of Travel